A seemingly harmless video of a junior basketball team exuberantly celebrating after scoring on their opposition has caused a stir after the vision went viral.

The footage, which shows a couple of young children over-celebrating and trash-talking their opposition during a number of basketball games at the recent T3TV Snowball Classic, has divided public opinion after being shared on Twitter by popular social media channel ‘Overtime’ alongside the caption “these 3rd graders acting different *ROFL emoji* (via @CourtsideFilms)”.

Watch every game live of the 2022/23 NBL Season on ESPN on Kayo Sports. New to Kayo? Start your free trial now > 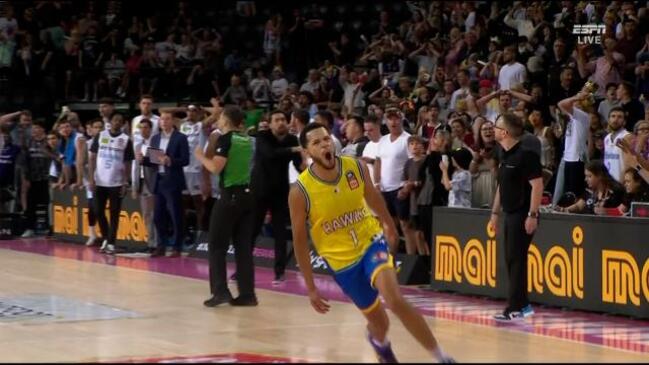 Some replied with comments and GIFs claiming that the boys needed to be taught a lesson in humility by famous Richmond High basketball coach Ken Carter, who was famously portrayed by Samuel L. Jackson in the 2005 sports biopic ‘Coach Carter’.

“Nah this is trash. Have some sportsmanship. I coach middle school and if my boys did this, they are benched immediately. Unacceptable,” one comment said.

“You can tell the Internet raised these kids…,” another user replied.

Ironically, and perhaps in hindsight profoundly – as a large number of those replying in the comments section were quick to point out (including former NFL defensive tackle Daylon Mack) – Minnesota Timberwolves’ guard Austin Rivers had recently said on his podcast that he doesn’t like the “highlight culture” that has been created at every level of basketball.

“The little things in basketball are forgotten now and they’re not appreciated,” the 10-year veteran said during an episode of his ‘Off Guard’ podcast.

“When I played in high school you only got a mixtape if you were a top-tier guy. Back then, you had to put in work – consistent work, build a name for yourself – to get a mixtape and it was an honour a Ballislife… (or) a Hoopmixtape.

“We didn’t play to have one though, I didn’t go into a game doing something to be on Hoopmixtape, I went into the game to just win and be myself… I didn’t ask Hoopmixtape to come follow me… I didn’t pay Hoopmixtape… (or) Ballislife a dollar. That’s how it was.

The internet has changed how sports are covered and consumed around the globe with everything that happens on the court at the professional level so easily accessible to basketball fans, and in particular impressionable young children, at just the simple click or two of a button.

In the vision, some of the little lads can be seen shouting in their opponents’ faces, overzealously celebrating and throwing up various signs with their fingers – just like their heroes do in the NBA.

10-year NBA verteran Evan Fournier used the video as a tool for self-reflection and it’s safe to say the 30-year-old wasn’t happy with what he saw, calling on his colleagues to make a positive change.

“Smh (shake my head). We need to set a better example for this new generation man,” the New York Knicks’ guard declared while retweeting Overtime’s post.

Fournier’s comments evoked a reaction from his followers and fellow NBA players.

And it wasn’t just NBA players who shared Fournier’s sentiment.

“I didn’t like none of that… But it does start at the top. They emulate what they see from the Pros,” CBS Sports’ sideline reporter Otis Livingston commented.

“It’s actually entertaining, no one wants to sit there and watch spurs or Harvard basketball, let these kids have some flavor to their game,” another Twitter user replied.

“FACTS!!! I coach this age and I’m a no nonsense type coach but I still let them boys get they sh*t off *five crying with laughter emojis*,” another agreed.

Get all the latest basketball news, highlights and analysis delivered straight to your inbox with Fox Sports Sportmail. Sign up now!!!

Youth sports are designed to be fun, therefore young kids copying the celebrations of the athletes they idolise shouldn’t be a big deal, or come as a shock.

However, Rivers’ overwhelming point is that the balance is out of whack as it appears that the flashy moments and subsequent celebrations are being prioritised and valued at the expense of things such as fundamentals and basketball IQ.

“Making a hockey pass, which means making the right pass – even though you’re not going to get an assist – you’re driving to make a play so someone else can make the play to get an assist, diving on the floor, talking on defence, playing defence at all, shooting good shots, making the game easy, being efficient with the basketball, scoring off one or two dribbles rather than 15 dribbles,” Rivers vented.