Three All Blacks stars are in doubt for the remainder of the Super Rugby Pacific playoffs, as well as next month’s test series against Ireland.

In a matter of hours, Highlanders captain Aaron Smith, Blues skipper Dalton Papalii and Crusaders flanker Ethan Blackadder were all reported to have sustained injuries on Friday.

Blackadder, who was in fine form for the Crusaders as they toppled the Reds to clinch a semi-final berth in Christchurch, left the field during the second half of the 37-15 quarter-final win at Orangetheory Stadium with a shoulder injury.

Wincing in pain as he departed the field, Crusaders boss Scott Robertson revealed post-match that the nine-test international is unlikely to feature for his side again this year.

“It’s a shoulder, not great,” Robertson said in an early indication that his All Blacks selection prospects don’t look flash.

“He’s unlikely to be involved for the rest of the season for us, and hopefully it’s not (requiring) an operation.”

Blackadder will have scans to confirm the severity of the injury, which could sideline him for months if the 27-year-old is forced to undergo surgery to repair a shoulder dislocation.

The sight of Blackadder’s painful exit from that match came shortly after reports that Smith and Papalii will both be unavailable for the quarter-final clash between the Blues and Highlanders at Eden Park in Auckland on Saturday.

The Highlanders confirmed to Stuff on Friday that Smith, the incumbent All Blacks halfback, was “in doubt” for the do-or-die clash due to a groin injury.

While the nature of Smith’s injury appears far less serious than that of Blackadder’s, Stuff suggested the 101-test star may require two-to-three weeks to recover ahead of the All Blacks series.

That would be a significant blow for the Highlanders, who would be without their talismanic leader for the entirety of the Super Rugby Pacific playoffs should they shock the competition and progress past the Blues this weekend.

In Smith’s absence, the Highlanders will likely start Folau Fakatava and promote Kayne Hammington onto the bench. 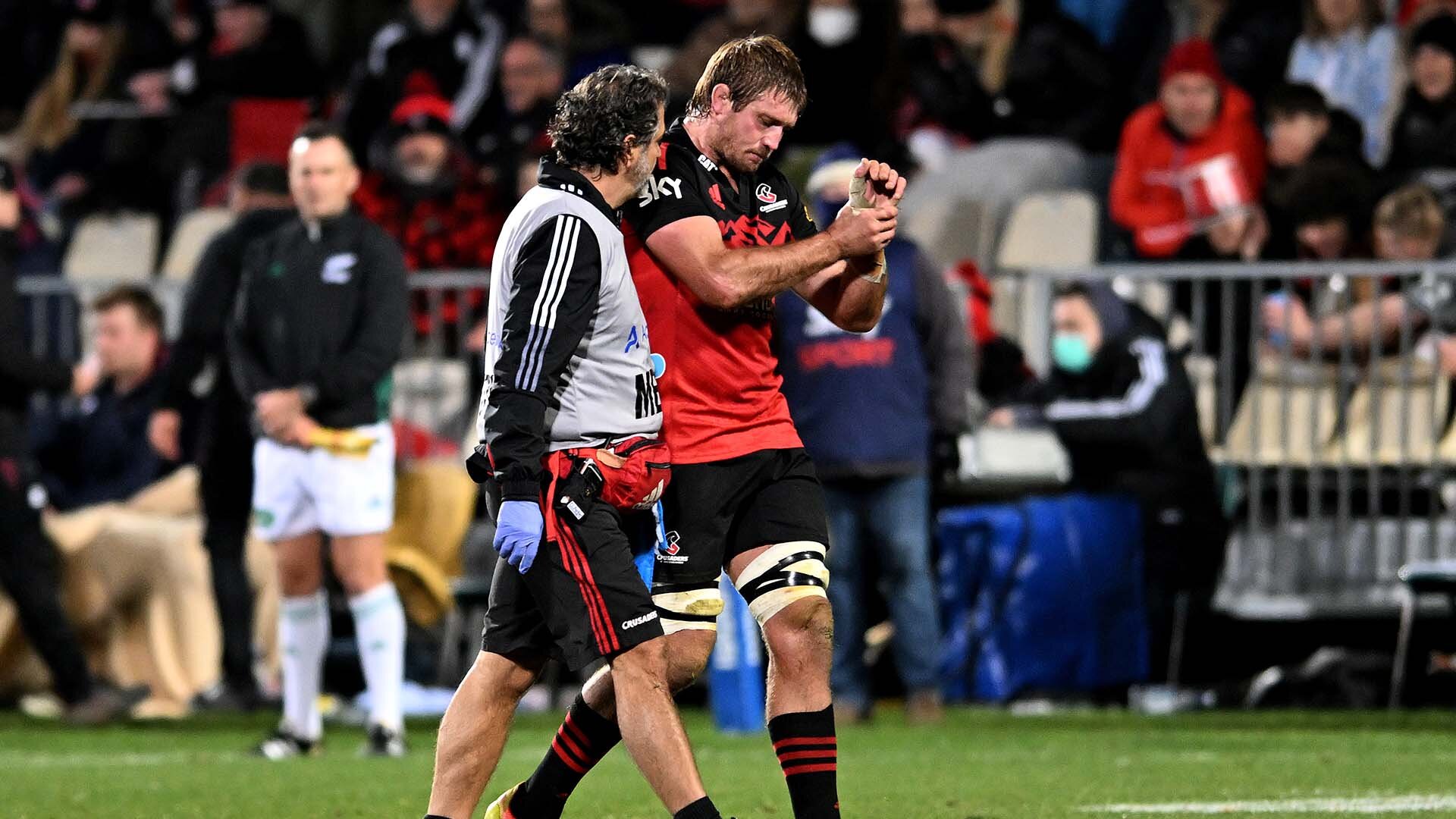 Crusaders flanker Ethan Blackadder leaves his side’s quarter-final against the Reds with a shoulder injury. (Photo by Joe Allison/Getty Images)

The Blues also face the likelihood of some alterations to their match day team as well, as per the New Zealand Herald, which reports that Papalii won’t feature against the Highlanders.

According to the Herald, Papalii could be gone for the rest of the Super Rugby Pacific campaign due to “a medical issue” which leaves him “in doubt” for the three-test series against Ireland.

The loss of Papalii would be a major casualty for the Blues as the 12-test loose forward has been one of the form players in Super Rugby Pacific this season.

An instrumental figure in his side’s record-breaking 13-match unbeaten streak, Papalii would also be a significant loss for the All Blacks, with whom the 24-year-old is expected to play a prominent role against Ireland.

Losing Papalii and Blackadder to injury would thin New Zealand’s frontline flanker stocks for All Blacks head coach Ian Foster to pick from, and would leave captain Sam Cane as the outright favourite to start at openside flanker.

Without Papalii, other options to fill the No 7 jersey include Hurricanes powerhouse Ardie Savea, although he is likely to start at No 8, and versatile Chiefs back rower Luke Jacobson.

Jacobson’s chances – and those of others such as Blues loose forward Akira Ioane and Highlanders injury returnee Shannon Frizell – of starting at blindside flanker may also receive a boost if Blackadder is out for a substantial period.

Foster is already without the services of Chiefs midfielder Anton Lienert-Brown (dislocated shoulder) and Crusaders prop Joe Moody (ruptured ACL) for the rest of the year.

The All Blacks squad, expected to be made up of about 36 players, for the Ireland series will be named on June 13.

Betting News
A gulf has always existed between the NRL and Super League but is it about to become worse?
3 days ago
0